Collecting RuuviTag measurements and displaying them with Grafana

How can I show in Grafana pressure difference between two different tags?

As far as I know Grafana / InfluxDB does not support this in an easy manner, you’d probably need some kind of continuous query which creates difference data

. @Scrin would you happen to know an elegant way to do this?

As far as I know you are correct, InfluxDB does not support on-the-fly calculation between separate measurements (pressure values from two different measurements in this case), and as far as I know, the InfluxDB builtin Continuous Queries are restricted by this same limitation. The method recommended by InfluxData is to use Kapacitor, which is their data processing engine, to perform this kind of calculations.

We showed the project to our teacher and his opinion was that somehow the RuuviCollector isn’t sending data. Now we are trying to build the ruuvicollector again, but now the building is giving errors/failures. 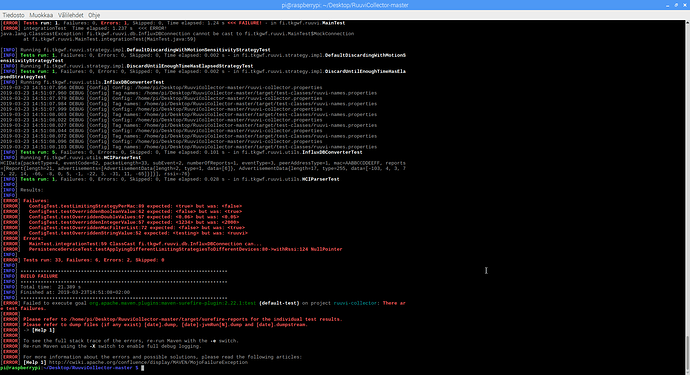 Screenshot_20190323_145722.png1920×1044 294 KB
We then tried modifying the values inside ruuvicollector properties file, and with modifying “influxBatchMaxSize=2000” to 1234 and “limitingStrategy.defaultWithMotionSensitivity.threshold=0.05” to 0.06. This got rid of two “failures”. The building worked without properties file, but that didn’t give any data last time so that’s why we are trying to get this to work with the properties file.

Also, continuity to my last problem, hcitool. We noticed/remembered that line "sudo setcap ‘cap_net_raw,cap_net_admin+eip’ which hcidump gave an usage error for setcap.

so for the first one (I wasn’t sure how much you wanted from it so I copied everything):

I can’t get status for ruuvicollector as it cannot be compiled with the errors I’m having, so it’s not running. If I recall correctly it compiles without the properties file, but I want to have it with the properties file. The errors should be in my previous command. I still have them if you would prefer them in text. For the first command

I have the bluez installed, but I don’t know why it doesn’t work, though in the end it gave me

Now we are trying to build the ruuvicollector again, but now the building is giving errors/failures.

We then tried modifying the values inside ruuvicollector properties file, and with modifying “influxBatchMaxSize=2000” to 1234 and “limitingStrategy.defaultWithMotionSensitivity.threshold=0.05” to 0.06. This got rid of two “failures”. The building worked without properties file, but that didn’t give any data last time so that’s why we are trying to get this to work with the properties file.

This is actually a bug in the tests, for now you can workaround this issue by compiling the package without running the tests with the -DskipTests flag, for example mvn package -DskipTests

edit: this bug has been fixed now

Also, continuity to my last problem, hcitool. We noticed/remembered that line "sudo setcap ‘cap_net_raw,cap_net_admin+eip’ which hcidump gave an usage error for setcap.

It looks like you have bluez installed but not bluez-hcidump. You need both (as mentioned in the requirements), the latter one provides hcidump.

It looks like you have a standard raspbian, in which case you should be able to install it with:

should work without any “usage errors”. After these RuuviCollector should be able to get the data.

If not, you can try troubleshooting it by first stopping ruuvicollector and then running:

this should print out all the raw data that’s received (as long as hcitool is running in another window!). If you encounter any erros with these, you could try googling for help. Once those works, then RuuviCollector should work too, as RuuviCollector runs those two commands internally.

Hey, thanks. I must have missed that bluez-hcidump installation. I’ll be installing that asap. Thanks

Pasik: Why are you trying to revise RuuviCollector before you have the version Scrin made working?

I’m trying to figure out why I’m not getting any data to grafana. I figured I could try with the properties file if there is something that could help me

What databases, measurements and series do you have?

And you have setup a data source in Grafana which uses the same Influx database as the RuuvoCollector uses?

If you are not getting anything from ‘99 04’ manufacture ID packets from hcidump, RuuviCollector will not see anything!

Also if RuuviCollector is running and has forked

Another attempt to run hcitool lescan will fail with

results should be similar to:

Hi, so this is what’s happening:

I tried the first thing you had in this message, did I do it right? I just wrote the whole thing as you put it but it didn’t give anything. 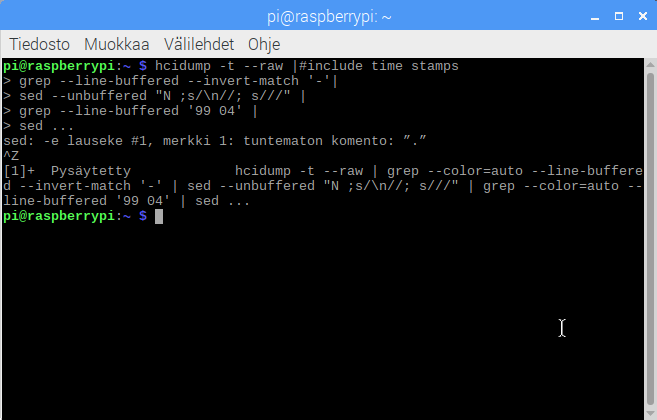 The “sed” gives an error that the first character is an unknown command. I didn’t understand that message you are referencing to, care to open it a little for me? I probably need to use it but I don’t know what to do with it.

I used your influxdb command and it gave me https://i.imgur.com/esEZThJ.png I don’t understand how it doesn’t have any data from my ruuvitag(Just gives some random default data.) I have the mac address everywhere I could think of, for example in the ruuviCollector properties file under whitelist. The ruuvitag is using RAW mode, as I suppose it should be.

Any thoughts are appreciated, thanks.

I don’t know why my macs are abc’s.

Yeah the grafana has the same details as ruuvicollector 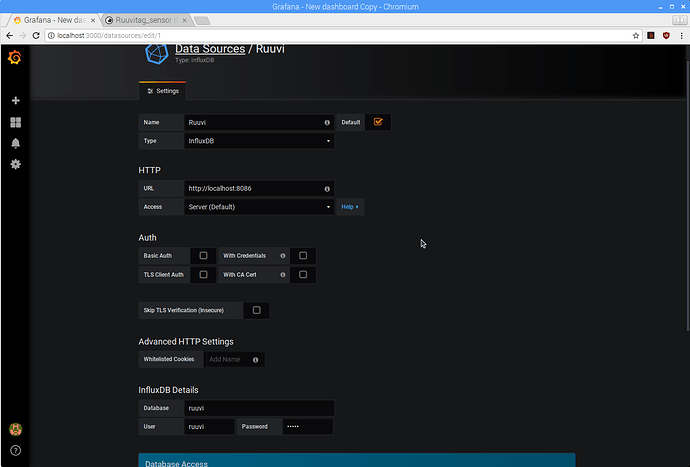 So the hcitool works before running the ruuvicollector, like here https://i.imgur.com/pKF3dUJ.png But after running it, hcitool lescan gives an input/output error. For that I found another ruuviforum post and there someone suggested going to bluetoothctl console and powering on power, agent and scan, and reboot the machine after that. After doing all that, 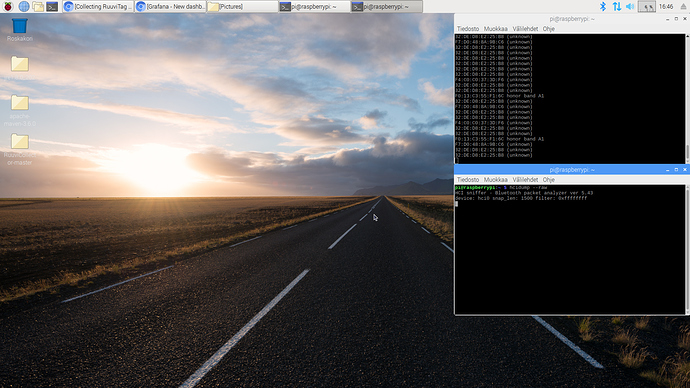 After starting ruuvicollector, the “hcitool lescan” doesn’t work, but “hcidump --raw” gives the same blank window as before starting RuuviCollector. Am I missing something?

dgerman) meant that run the command in his post which is number 211 in this thread. Here is link to the post: -> Collecting RuuviTag measurements and displaying them with Grafana

if there are no devices shown, you don’t have a bluetooth device!
You should see something like

+++
Note: once a process issues hcitool lescan subsequent attempts will file with the error. A shutdown may be needed to clear this issue.

I’ve been trying to find solutions for reducing the influxdb size. If there’s already a solution then can you please point me to it

My issue is that I’ve been running raspberrypi with ruuvicollector, influxdb and grafana for ~10 months now. Just this morning my grafana interface stopped working and I noticed that raspberry has totally run out of space.
Is there something I can do to downsample the data? I’ve installed a virtual machine with ubuntu and tried messing up with a copy of the database but so far haven’t got any results…

For future samples, you can easily discard some measurements already in the collector by adjusting the measurementUpdateLimit configuration property in ruuvi-collector.properties.

Custom retention policies and continuous queries for downsampling the data is another more advanced approach which lets you “gradually” downsample data over time as it gets older.

For downsampling the existing data, you need to run an “INTO query” as mentioned in this post (obviously do this before setting the retention policies to drop the oldest “full accuracy” data if you don’t want to lose historic data. Though as always, remember to take backups before experimenting)