Is Ruuvitag realy waterproof? I used to monitor my sous wide -cooker with ruuvitag. Temperature was 65 degrees Celsius and th RT was floa! ting. After 9 hours cooking I took RT away, dried it with a towel and opened it. You can see the result from the photo attached: A few drops of water was inside the tag. 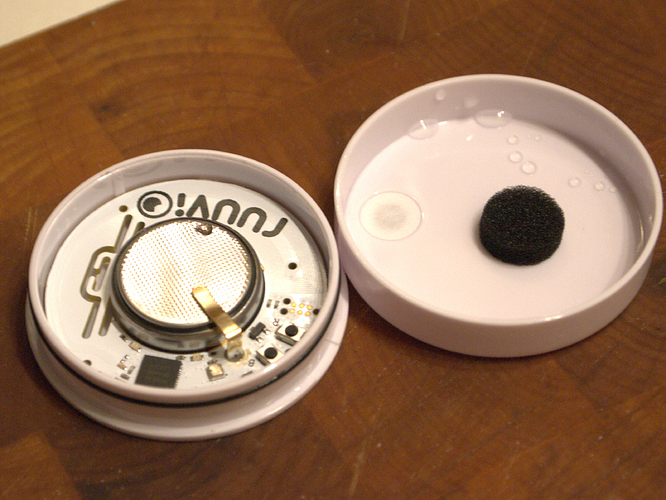 The RuuviTag is waterproof (IP67), but not airtight, which means it’s not immune to condensation which is the likely cause here; humid air will slowly go through the breathing sticker (the tag wouldn’t be able to measure the humidity otherwise), and if the temperature drops at any point when the relative humidity is close to 100%, condensation will occur. More specifically, if the temperature drops below the dew point, condensation will occur on surfaces that are colder than the current dew point of the air (outside or inside of the enclosure).

For example, typical air with 40% relative humidity at 65ºC has a dew point of about 46ºC, so if that air comes in contact with anything colder than 46ºC (when cooling down for example), condensation will happen. At 99% relative humidity, the dew point is mere fractions of a degree below the temperature, and with tiny fluctuations for a long time it’s easily possible to get a drop of water condense every few hours or so.

If you cover the breathing hole with tape or something else to make it airtight, condensation should not happen inside the tag unless you put the tag into a much colder environment than where you sealed the tag (the humidity of the air when you seal the tag is what counts for the effective dew point in that case, since the air won’t change).

Thank you for the feedback and very extensive testing. RuuviTag is tested to be waterproof and passed IP67 testing which has 30 minutes underwater testing in room temperature. After you dried the device is it working again?

As this is a new use case, we would like to know a bit more to understand what happened here:

If you can test it again we can send you transparent enclosure where we can see that Gore sticker is bonded perfectly and it easier to see if water goes in again due to cooking process. Nine hours in quite hot water is anyway quite harsh process for Gore sticker.