A volcano (Hunga Tonga-Hunga Ha’apai) erupted in Tonga last week on Saturday. There have been reports of a measurable pressure wave across the world. I, too, was able to see the effect with my RuuviTag

The change is not huge, and it is more visible in the App which collects measurements more frequently. All of my RuuviTags have the increase and decrease.

To me this a wow thing: I was able to measure a volcanic eruption on the other side of the world!

This was indeed surprisingly well detectable event, considering the distance. My tags did detect the pressure wave here in southern Finland as well.

My tags are sampled at 5s interval and every measurement stored, my results look like this for the first wave:

And the 2nd wave:

To me the most interesting detail is how the air pressure has all these tiny ripples long after the wave, while being relatively calm and stable before the wave.

Thanks for the 5-second graphs. I thought I’d get the same when syncing the RuuviTag with the App but it was just the 5-minute graphs. Maybe I misremembered how it was supposed to work.

Anyways, as I wrote, this was a wow moment! Thanks, Ruuvi, for making it so easy!

PS. I did not look at the acceleration data. Probably nothing registered

I found nothing in my acceleration data when I checked, only noticeable changes were in the pressure measurements (and other measurements that are affected by pressure), as you guessed. Considering the frequency of the first wave observed here was in the millihertz range, it’s very difficult to pick up on anything but a very sensitive pressure sensor

I did not really believe that the RuuviTag’s acceleration data would reveal anything. But I would not have believed in the pressure wave being visible either.

I tried to find subsequent passages of the pressure wave in my RuuviTag pressure data. My calculations showed that

I also found something in the pressure data at 20:40 on Jan 16 but it does not match with the pressure wave going around the Earth. Any thoughts? Some constructive interference of two pressure waves?

I recall there being some discussion somewhere that this was another, smaller eruption but I can’t find any official sources about it

image1236×338 50.7 KB
Not sure with time zone and geograpical distance when your 20:40 anomaly would have hit here but it is much noisier than usual.

Thanks for sharing, I completely missed that this pressure wave had gone around the world and was something we could see ourselves.

Got some readings also in Toijala on all my 5 ruuvi.

(Screenshot only included 2 of those…) 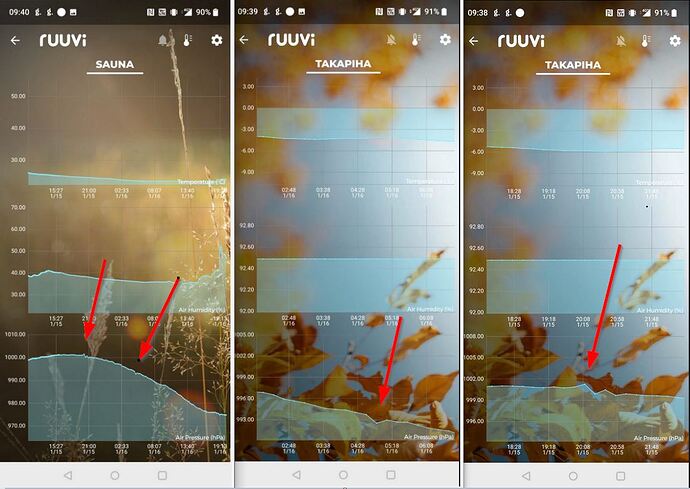 It turns out I recorded it in Moscow too! 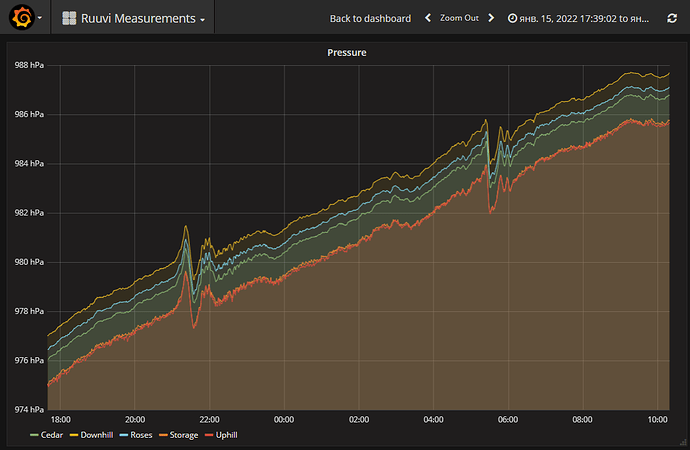 Many thanks for pointing it out. Isn’t it a small world?

I do not have my Excel in which I calculated the distances and speeds in front of me right now but I believe this event corresponded to a distance of 40 000 km from the moment main eruption, at the speed of sound. It made me wonder how that could have been linked to the main eruption. Maybe it was from a secondary eruption.

Is this the same event?

I can’t really see the same anomaly in my data but that could be because of the low frequency that I’m capturing the data.