Test of humidity in closed versus open enclosure

Due to previous discussions regarding variations in humidity readings and I decided to make a test this weekend. The setup was as following:

image.png3128×762 112 KB
As one can see the closed enclosure slows down the adaptation to the surrounding humidity. This may not be a problem for most users since the changes in humidity usually are slow but it may be good to know. The reference humidity was 76% from the Viking sensor but I’m not claiming that one being more accurate. One can at least see that the RuuviTag with open enclosure is quite close in its relative humidity (70 to 71%RH).
2 Likes
DiAleksi April 23, 2017, 8:04am #2

Definitely. Did some testing yesterday in Sauna with and without the enclosure, tags next to each other on the wall. As one would guess, the humidity is affected much more than the temperature.

More graphs about this comparison can be found here, on the bottom of the page.

(note: the absolute humidity and dew point are calculated values, and thus they have a much larger error margin) More about my setup can be found in this thread.

How safe it is to use ruuvitag in sauna without enclosure?

It should be relatively safe, the most important thing to watch for is the placement of the tag, further away from the stove (kiuas). As far as I remember, the tags can handle up to 85ºC with the extended temperature range battery. The temperature on the walls and ceiling near the stove can easily exceed 100ºC, I measured up to 120ºC on the ceiling, directly above the stove using a IR-thermometer, so I placed my tags on the other end of the sauna, where the temperatures are much lower (mine is actually between the door and a small window). This obviously applies to tags with enclosures as well.

Moisture and condensation in general shouldn’t be an issue as long as the tag is “pre-heated” as the sauna warms up, rather than bringing the tag to the sauna with you as you go, this is because the dew point occasionally gets really high, meaning any surface below that temperature will get water vapor condensing into water on it, and in my graphs, you can see that the tag was always much warmer than the dew point, so no condensation should happen. 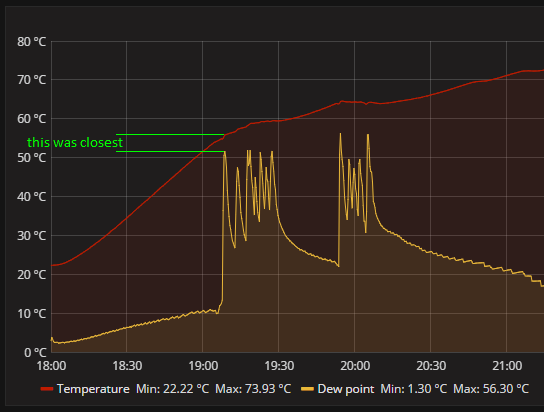