after I tried to update the firmware of my Ruuvi Tag using the Ruuvi Station android app (from a very old firmware, that wasn’t displayed in the app), it started flashing a red light. Repeated tries to update the firmware lead to the same result (the app reports that the update was successful). I also tried using the nRF app, but the update finishes “successfully” and the tag keeps flashing a red LED after the update is finished.

I also tried putting on fresh batteries, also without success.

Before (and after) I failed to update this one tag, I succeeded updating the firmware from 2 other tags of the same batch.

What does the flashing red LED mean? And how can I fix the tag?

Thanks in advance,
Ricardo

Red led flashing is usually a symptom of non-recoverable error in boot detected by tag self-test. It might be that a tag has a damaged sensor, that would also explain why Station app did not see the tag before update.

There isn’t much that can be done if the problem is damaged board, in theory it would be possible to connect a debugger to the tag to see what exactly is failing in the self-test and try to replace the component but that’s quite a bit of effort.

Is the RuuviTag board visually ok, or is there some discoloring on it?

the tag was working properly and displaying sensor data before, what was missing was just the current version number when trying to update it.

There’s no visual sign of damage, and it was working prior to the “successful” update attempt.

And pictures of the tag attached. 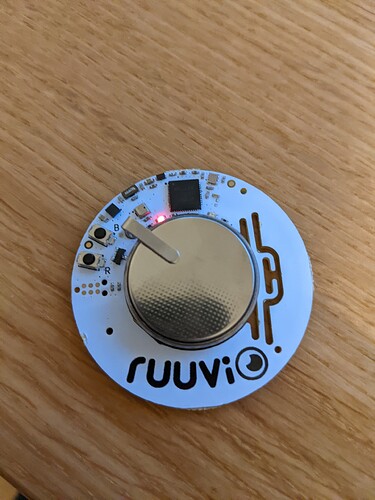 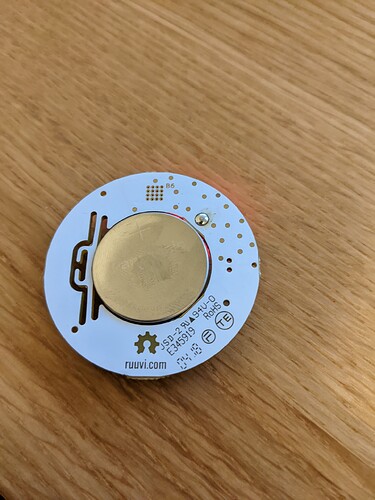 The board seems fine to me too. Sometimes there is a cold solder joint that fails when the tag is moved, it might be a visibly lifted component or invisible damage.

Please send email to sales@ruuvi.com and link this thread, we’ll figure out the next steps from there.

Can you enter RuuvTag to bootloader by pressing B (holding) and then R? And then try to update again using nRF Connect? https://ruuvi.com/software-update/

We have another report where tag is broken after the update but was able to enter bootloader and updated again. And it works again.

Yes, I tried that procedure too.

The tag does enter into bootloader, and the update seems to succeed, but when it reboots, the red LED starts blinking again.

I had the identical issue as @ricardo: Ruuvi Station tells me to update from a very old FW, after update a flashing red LED and nothing else. Could enter the bootloader but re-flashing with nRF Connect didn’t do jack, it would upload the new FW, reboot, and then go back to red flashing.
I tried flashing with different versions of the FW, rebooting multiple times, all with no luck. At this point it was like 11pm and I was getting more and more annoyed of breaking a working tag so I decided to let it be, removed the battery and let it sit on the table without power for the next 12h.
Next morning I thought I’d give it one last try before rage-quitting with it. Put in the battery and lo and behold, green LED flashing normally, Ruuvi Station collecting the values again and reporting the latest FW on the tag \o/

Thank you for the report and sorry for the trouble.

One possible cause is that battery is getting old, updating the firmware is somewhat hard on the battery. Taking the battery off gives the chemistry some time to “rest” and it can work for a short while more. Please try a new battery if the tag has issues in coming days / weeks

Seems to be a normal case. I had the same issue (blinking red) with two ruuvitags. Just taking the battery off and put it back after a few minutes was enough to solve the problem. Just as Jussi wrote. Both these tags were of “very old” HW with 10 holed connector pads.

First I updated a newer HW tag with 6 unholed connector pads with no problem even it had a weaker battery and started to report “replace battery” after update (2,48V).

On last (failed) update I checked the battery had 2,83V before and 2,75V after update.