Setting up a remote-readable dashboard for RuuviTag sensors using off-the-self tools as much as possible.

In the end, you will have the following kind of dashboard for displaying data. You can also add multiple sensors if needed.

What you’ll need for this

Follow the headless setup instructions from the Raspberry Pi site.

Note: You might want to login using SSH keys instead of the default username/password combo.

Configure and run the application

In AWS Console, go to CloudWatch -> Dashboards to configure sharing.

With just one device, the AWS IoT usage is almost free. Note that you can utilize the 12-month free trial before charges start applying. 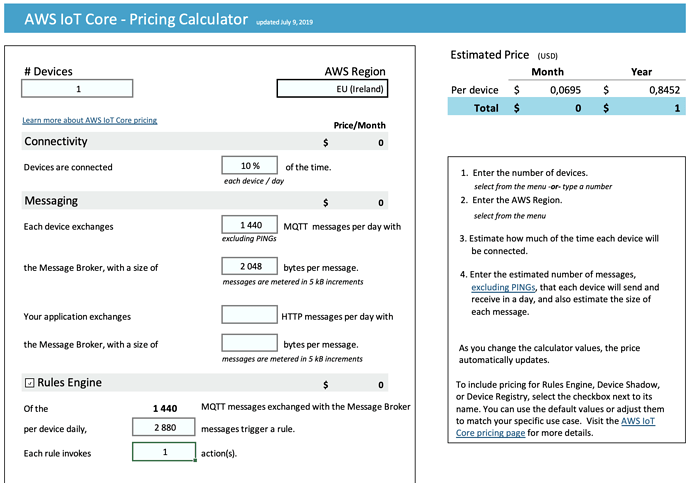 The idea was to use the most minimalistic version of Raspberry Pi for synchronizing the data from BLE to AWS IoT. As I had no previous experiences with the devices, I didn’t know they had different processor architectures: ARMv6 in Raspberry Pi Zero models and ARMv8 in RPi3 and newer.

The ARMv6 device comes with a NodeJs 10, and installing NodeJs 14 turned out to be slightly complicated but worked with instructions from https://raspberrypi.stackexchange.com/questions/111130/how-to-install-nodejs-v12-on-raspi-zero-armv6-not-available-for-download-anymor.

It seems AWS IoT SDK v2 does not work on RPi Zero: https://github.com/aws/aws-iot-device-sdk-js-v2/issues/119 The issue is still waiting for more details. The instructions, however, work with the SDK v1.

image1582×990 66.1 KB
The Error Action does not seem to be supported in CloudFormation infrastructure automation which prevents deploying automated alerts if something goes wrong. The error action can be added manually after the infra deployment.

Creating AWS IoT keypairs with infrastructure automation turns out to be rather complex. However, after a few iterations, I managed to get a CloudFormation custom resource working with the AWS CDK programming model.

Hello and thank you for sharing the project.

I’m adding this project to our collection of community projects. Could you add an explicit license, e.g. MIT or GPL to the project so everyone knows under which terms they can use the project?

if you’re interested in adding support of the upcoming Ruuvi Gateway email sales@ruuvi.com and we can ship you one prototype for free.