This idea was developed at class described at https://goo.gl/XB6RnT at this forum but I figured it would be useful to have a separate topic for it for updates etc.

My group at Centria (Kokkola, Finland) will implement as a course project a ruuvitag as a temperature measuring device for local hospital.
The idea is to use Ruuvitag to measure the temperature (and possibly humidity) of medicine cabinets and create a program that prints the measurements into a file for example every 4 hours.
Our biggest concern right now is to figure out how we can share the measurements only to certain users rather than sending the signal to everyone without making a new program that needs to run continuously on a computer or require other sort of user input.

We are still at the early stages of the project, aka we have an idea and a permission to work at the hospital, but I will keep this topic updated whenever we have something to share.

I’m not so sure why you’d need to protect the temperature and humidity data, that probably cannot be very sensitive? If you feel that data is very sensitive, you might be interested in looking to MAM encrypted data. Our MAM implementation is not yet production-ready, but if you decide to go with that route we can probably provide you support in getting the data going - just ask us first if you need some custom code.

Does hospital staff have smartphones on themselves nowadays? It might be possible to make the Centria Android app to push the data to the cloud, so whenever someone is near cabinet you’d get the data without having to sprinkle Raspberry Pis everywhere to act as a gateway.

To be honest, I agree that it should not be very sensitive either but sending the signal to everyone, even if only fraction of them actually have way to pick up the info, feels a bit off. Ultimately it is up to them if they feel its supposed to be only for authorized people or not.

Most of the staff probably has smartphones by now but I’m sure they have those as well that do not which is why I’m a bit hesitant to do that. I know they are not allowed to use phones during work (obviously) so they might even leave it at locker even if they got them so that might impose a challenge as well.

I am very excited for this chance though and hope to contribute towards Ruuvitag during this as well.

This could be one option, as these device can act as gateway between BLE - cloud:
https://www.beaconzone.co.uk/INGICS/iGS01

@otso pushing data from app is already implemented in current version =) so for PoC that might be way to go.

@Teriuchi Nice project idea. Looking forward to see it up and running

@otso, is there way to check what frequency the tag uses and the power of the signal?

Hospital would like to double check that it does not conflict with their equipment, even though its quite unlikely.

BLE is in 2.4 GHz Industrial, Scientific, Medical (ISM) band, same as WiFi.
Power is +4 dBm, or approximately 2,5 mW.
Transmission frequency is 1Hz or 2 Hz depending on mode of tag.

Great, I’ll forward the info to hospital. Thanks a lot!

I just like to add that i run the mentioned gateway together with 3 pcs Ruuvitag
It been working fine for some weeks now. 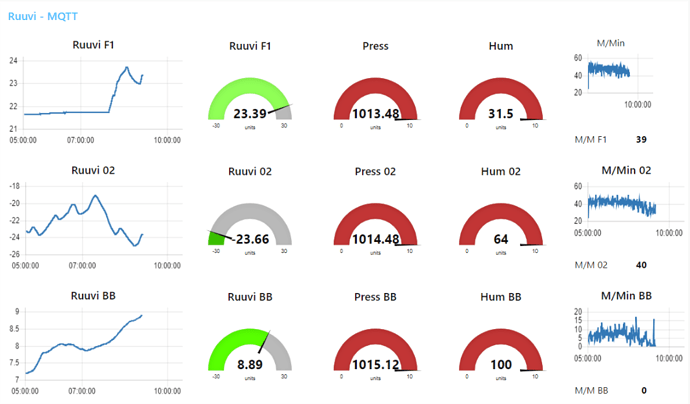