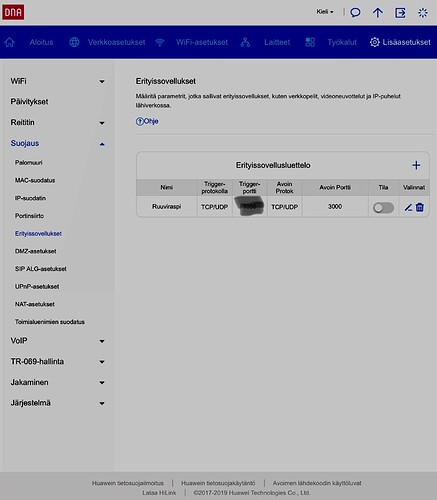 Google translate says:
I have 6 ruuvi tags on the rb3 behind the grafana. When I’m on a local network, I get to read tags normally. Instead, I can’t get caught in the graphan at a distance. When I test through dyndns then the gate to the rasp is open, i.e. the operator and route I think is off the fault list?

Otso replied:
It may be difficult to say what would be wrong here, for example, routing in Raspberry to grafana port 80 does not work remotely for some reason. Port 3000 can also be tried, the grafana routes in it.

jussipa added:
You need port control from the router to Raspberry. At least I had to do it. You should find the router settings.

I have this style. In practice, just http to 80 ports is enough. It’s only routed to the right port for Raspberry.

pappa56 responded with:
Yes I have had Port Control, but also the Huawei router under the protection has special applications point where I had done the same external port trigger control to the same internal network port when I deleted it so then started playing… !?