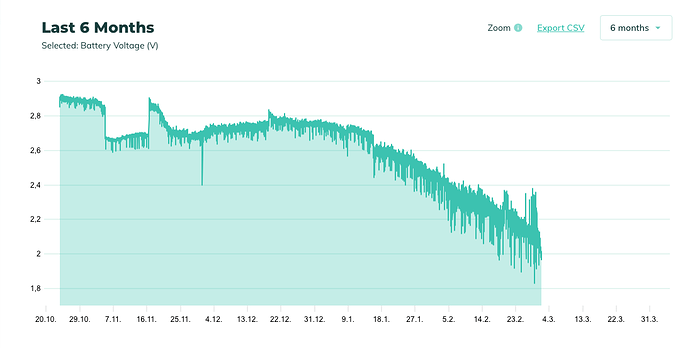 Google translates as:
I noticed there that there have been spikes in the battery charge level measurement since I last upgraded the firmware to them. Why is that?

The current firm is v3.31.1. I don’t remember the previous version number anymore.
…
In other words, the firm has been updated around 03.11 and now that I just replaced the battery, at least similar spikes are not yet visible, but it seems that the higher the battery charge level drops, the bigger the spikes become.

This is quite a correct observation.
In the old firmware, the battery voltage was measured “when it hurts”, in the newer firmware the voltage is measured during radio activity.

The radio loads the battery which causes the charge level to drop, those spikes being one of the first signs that the battery is running low. Another sign is to reset the “MeasurementSequenceCounter” value, if the value resets itself often it is time to replace the battery.

Here are the curves of my own tag before the battery runs out:

Here is a detailed discussion about battery usage and anomalies .
FAQ: Battery