Hi there! It’s been a long time since I last visited here…
Back in 2017 I bought six Ruuvitags that I have been using happily ever after. I never calibrated them against any reference measurement devices but I got used to them giving very consistent readings: when the weather has been perfectly still for a while and there was no sun, all sensors scattered in different parts of my hilly piece of land would show exactly the same temperature within 0.1-0.2 degrees, also the pressure readings from sensors located at different altitudes would stack up perfectly in order of increasing altitude - even one meter difference in altitude is perfectly noticeable.
Now I bought six more and started placing them on my plot. I noticed that one of them was giving noticeably (about two degrees) lower temperature than expected, then I noticed that the pressure is also substantially off compared to other sensors. I put two new sensors and two old sensors side by side on a table and waited for a few hours for the temps to level out. Here’s what I see: 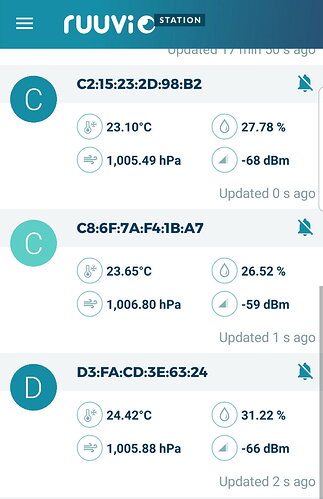 Sorry to hear about your issue.
The tags have shipped with 2.5.9 for most of the 2020, so all your tags should have the same firmware.

Obviously the old sensor is outside the range compared to new sensors. One possible explanation is that the old sensors have drifted over time. Please contact sales@ruuvi.com and send the details of how other 4 of the 6 new sensors are comparing to each other and old tags, we’ll investigate it further.

Hi otso, thank you for your attention. I looked at the specs (probably for the first time in three years if ever

) and I now see that indeed they are within the (rather generous) accuracy margins. I guess I was spoiled by the fact that the first batch performed so much better than the specs.
I have already stuck three of the new ones in places where I would rather not dig them up from right now

Here are the readings from the three new ones available to me now, as compared to an old one:

They are clearly within the specs from each other if we assume that the old ones drifted somewhat up over three years (with an amazing synchronicity!

) So I guess there is nothing to complain about - just an observation. Might be useful to someone.

Did you mean literally “dig them up”? like are they buried?

I had to modify my septic tank discharge route and now I am afraid it can freeze in the winter. So I covered some critical spots with sheets of plastic foam and piled some soil/sawdust/leaves upon them and before that I put Ruuvitags inside for monitoring. The signal from down there does not make it to my Raspberry Pi but if I come close I can see the readings on my phone which is ok for my needs.
So it’s not like meters of soil but still I’d hate to dig that up with no solid reason

There have been reports of problems due to very high humidity and variations of chilling. This may cause humidity to penetrate the gore covering (like it’s supposed to) but then chilling may cause condensation which eventually builds up. If you’re not concerned about humidity (and its’ easy enough to dig it up) you might consider covering the breather hole with very good quality electrical tape. You might be OK though.

What is the range of temperature reading you are seeing? Although I don’t have any personal experience I’d be surprised to hear of septic tank discharge freezing. The biology down there usually gets pretty warm.

In fact, you can see the charts here (it’s in Russian but I guess you could use some Google-translating): http://weather.large.ru/dashboard/db/iakhroma?orgId=2&from=now-3y&to=now

What is the range of temperature reading you are seeing?

It’s well above zero so far but we didn’t have any real cold weather yet.

I’d be surprised to hear of septic tank discharge freezing. The biology down there usually gets pretty warm.

Yes, in theory, but the new discharge route is a ~30 meter pipe buried in a shallow grave down a slope and its end sticks from a concrete retention wall right into a ravine that often sets local records of cold

Just curious, what action can you take as the temperature approaches freezing?

I’ve got a heating cable inside the pipe

I did some more experimenting: put 6 old (2017) and 4 new (2020) tags in the same place (outdoors, around zero celsius, no sun) and waited for almost two hours. Here are the results: 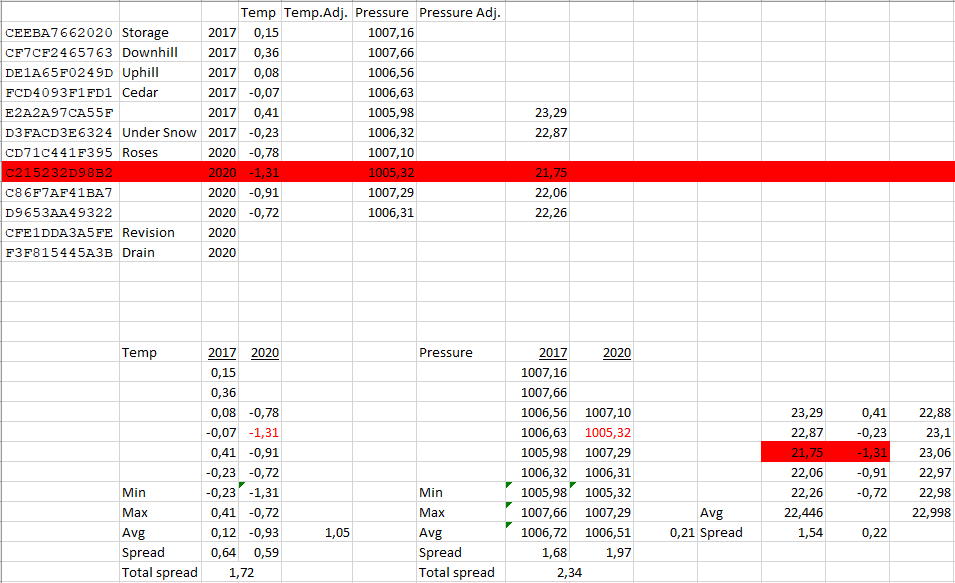