I used to keep all old log data in RuuviStation but when log uploads became time-consuming (log files of several MB) and sometimes failing, I wiped the old log data from RuuviStation. Now uploads work switfly, and even sync between Ruuvi Station and RuuviTags seems to work well in iOS.

I wonder if the old log data has not been deleted. I have restarted the App, but it did not help. I have not restarted the phone, and I do not believe it should be a requirement for App to release previously used memory.

Any ideas about what consumes all that memory, and how to release it?

Hi @Mikko. Thanks for the report. If you have a Mac, you are able to check what files are consuming space on your iPhone.

Personally, I use free version of iExplorer https://macroplant.com/iexplorer. 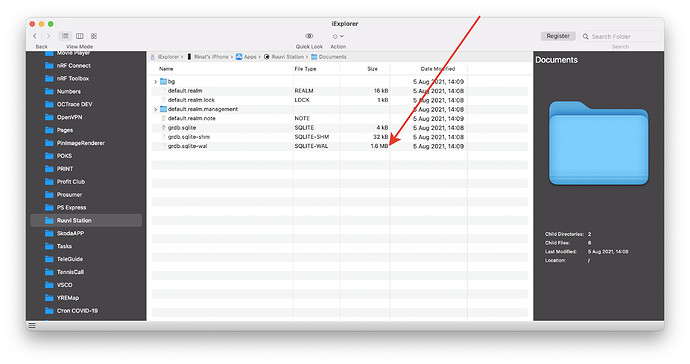 If you don’t force kill the app manually, it must prune data older than 10 days automatically. I’ll investigate if there are any bugs, but any report (like with iExplorer) would be super handy to understand who’s growing so fast on your iPhone.

I have a Mac, and will check this memory usage within a day or two. The overall Ruuvi Station memory footprint now is 343 MB for documents and data. So, a little less than last time, but way too much, I guess. Now I have no data older than Aug 1 in the App, the day when I did my last upload and then wiped all RuuviTag data in the App.

I downloaded the iExplorer. First it did not launch at all, and Google search for “iExplorer does not launch” showed only Internet Explorer troubleshooting. The launch problems were due to my strict security settings.

When I finally was able to look into my iPhone’s files, I noticed that iExplorer did not show RuuviStation at all. The file path was iExplorer//Apps. I saw the same left panel as your screenshot showed, with some of the same Apps but no RuuviStation. Interesting, I would say.

The App is on my iPhone, and I use it. So I wonder how it hides from iExplorer. And when I check the phones memory usage, via Settings, I can see how much memory RuuviStation uses. I wonder if I should uninstall and start afresh.