Hi
Hope this is the right place to post!
I want to use a Ruuvi tag in my beehive to measure temperature and humidity.
Could I log the data on something like a Raspberry Pi, which would be located in my shed, which is three metres away from the hive.
I have a deep cycle battery charged by a solar panel on the shed roof.
I would like to record the data at half hour intervals and store it then display the readings on a chart on the RPi when I visit the hive site. Also, if possible, use a second tag to record the ambient temp/humidity on this same display showing date, time etc.
I own a Raspberry Pi3 and know how to boot it up! I am capable of downloading a clean image onto the sd card and downloading packages to run examples with external connections to the Pi. I am not a programmer, so any software to achieve my aims would have to be idiot proof! It’s an age thing!
Has anyone used a tag in similar way to what I want to achieve?
Sorry if this sounds simple, but I was was born in the first half of the last century when anything labelled as wireless contained tubes/valves?
I would really like to know what goes on inside my hive and I think Ruuvi Tag would be a good way to find out?
Thanks in advance for all/any replies.
Regards
John W.

Hi!
I would say that this is the easiest solution to log data and get a nice graph at the moment:
https://f.ruuvi.com/t/ruuvitag-logger-and-viewer-on-raspberry-pi-3/

You need to install the packets listed and change some lines in the code but it should be fairly straight forward.

As Weather station is updated to data format 4 and SensorTag data format 3 is released. I’ll update next week Ruuvitag-logger to support those both format, if my daughter leave me some time.

Hi, Im thinking of using the ruuvitag for the similar purpose. Right now the tag is measuring the hive and i can go and get the readings by visiting the hive. The goal is to eventually get a pi running which would log the readings and send them to a server so i could get the reading from home and from multiple hives and locations simultaneously. The tag has a sensor to monitor movement? which could be activated by updating the firmware so that the tag would report if bears get to the hive. The scale would be nice addon too but maybe harder to implement, that is if I don`t find a ready made scale which would use ble.

Also maybe desibel measurement could be useful if the aim was to monitor the development of a swarm? I think by analysing the temperature we could maybe already get a idea when the swarm is forming. Ideal would be that the analysis would be made automatically server side and I would get a txt or email warning of movement or of the swarm. There are similar products already but I really think they are way too expensive.

I am interested in your solar panels and if they suffice for the pi. The pi3 uses more power than the new pi zero so it could be more suitable for this. I am trying to get by as cheaply as possible and maybe even so that the pi unit and scale?(and the solar power) would be integrated in one of the populated hives.

Yes, newest Weather Station firmware transmits also accelerometers’ data. So you can just add a trigger, if new data is significantly different form previous, so there is movement detected.

Hello,
I have now a prototype running on a hive. My last survivor infact. Here is a screenshot: 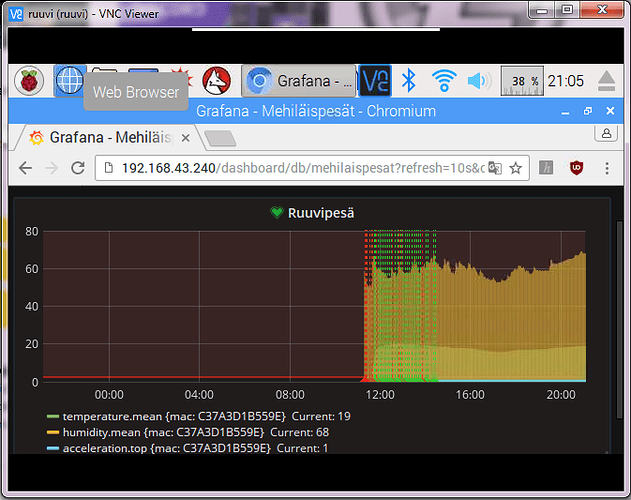 kuvankaappaus.PNG673×533 99.4 KB
Im connecting the hive with vcn (there must be better way) And Powering the RPi with solar panel connected to a battery and a charge conroller. I also have a Mic recording the hive but it seems either the bees are too silent or there is a problem with the mic or soundcard. The accelerometer alerts when accleration goes above 2. Above 1 gave constant alerts as it seems the buzzing of the bees was enough to trigger it. The logger is GSM connected and the router is a old tablet i had lying around. Now we test which part breaks up first

Haha, that’s a nice idea try to listen bees and use accelerometer to sense their activity

Can you reference similar expensive products so we can see what capabilities they have.

What about weight of the hive? Is it possible to connect mass sensor to the ruuvitag?

Example of a commercial product which is in operation. Im not sure if they operate outside UK though.
http://www.arnia.co.uk/
Other more hobbyist product would be https://www.osbeehives.com/
or even more hobbyist one:
http://hivetool.org/w/index.php?title=HiveTool.org

You can connect the weight cells to the Pi attleast. There are typically issues with temp correlation when using them. The beekeepers unions scalehives in finland are all manual for this reason i think.

Im testing out both the buzzbox and ruuvitag with pi in order to find out if we could do the same kind of analysis that the buzzbox does but with only ruuvitag as the sensor.

Thank you @mikko_petajaniemi for links. There are many really amazing devices and solutions to make beekeeper’s life easy. Connect scales to the Pi is obvious and logical way if you have one or two hives. But idea using ruuvitag with weight sensor is more suitable for multiple hives with one Pi for data storage and communication. 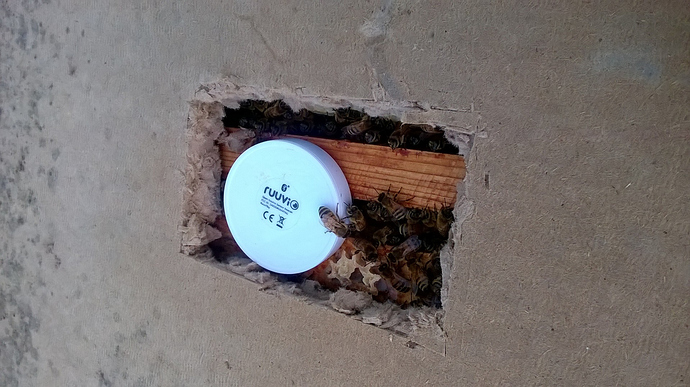 I removed one of my ruuvi tags today from one of my top bar hives. I wanted to see why the humidity was not registered properly and how the tag had stood up to the high humidity in the hive. I also wanted to update the firmware.
The tag had been in the hive since early last summer.
On looking into the hive the bees had coated the tags case with propolis and had sealed the membrane, so that’s why the humidity wasn’t changing.
I opened the case and updated the firmware and everything was has it should be.
The problem I have now is that I can’t remove the propolis from the membrane so I will have to replace the case.
Does anyone know if it’s possible to purchase new cases from Ruuvi?
Can I upload photos to the forum and if so how do I do it!?
I still have 2 other tags inserted into my hives, so I expect that I will have to replace their cases as well.
I’m thinking of putting the tags into a mesh box so that I will not have to replace the cases in future.
Thanks for any/all replies.
John

Just drop an email to sales@ruuvi.com and we will figure that out. There is an upload button on bar where are all different kind of tools. It would be nice see pictures what bees have done to RuuviTags 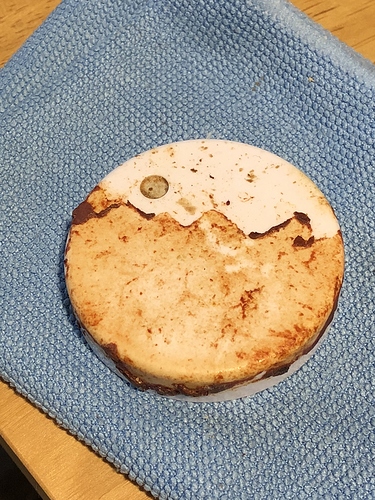 Would queen cage work for keeping the tag running?

the weight of the cube can be checked with a IKEA scale.