I see that there is an Arduino core for the nRF52832, and the Arduino is also working on this chip. Are you planning to add Arduino interpreter? Or do you know how to add it manually?
Many thanks!

Arduino is working on Arduino Primo Core, I think that the support is still work-in-progress, however we’re keen to add Arduino support once Primo is officially released.

There is Arduino Core for NRF5. I tested it a few months ago, and RuuviTag could be flashed with the core. However, flashing is done with a wired connection, so you need our developer shield to flash your Arduino code to RuuviTag for the time being.

Happy to hear this!
I spoke directly to the creator of the Primo and Primo core at the Turin Arduino Day, and he said that they will definitely start selling the Primo and the Primo core in a couple of weeks. I hope that you can take advantage of the Primo core system to upload the sketch over Bluetooth.
Also, the holes that are in the RuuviTag and the one under the microcontroller are for what?

Thanks for the update on Primo Core!

The holes under microcontroller are recommended by Nordic Semi example layout: 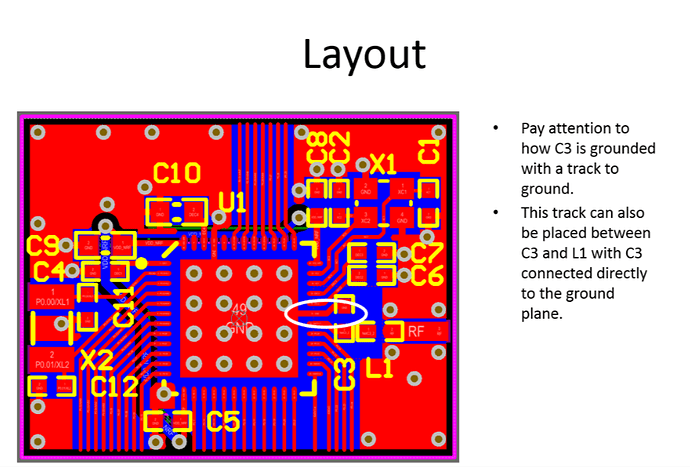 The holes on board help aligning the testpoints under the tag to development shield.

Also, the holes that are in the RuuviTag and the one under the microcontroller are for what?

Ground vias. Usually they connect to the ground plane (for multi layer boards). It also “sucks” the QFN packet in place when the led melts and some of it creeps through the vias.
@otso Any plans on using conformal coating to protect the PCB’s components? For products used outdoor or in harsh environment it is a common procedure.

We would need to look into how the conformal coating would affect the BME280, personally I’m afraid that coating would block the air vent on sensor.

If the BME280 can be omitted, I’d recommend using a fully sealed enclosure in extreme environments (without air vent).

Yes, true. Wasn’t taking the BME280 into account. Of course components can be masked but the coating is also good at creeping, this is an issue especially around connectors.
Fully sealed can however also be be troublesome due to condensation. Special GoreTex filters can be used but they are expensive.

@samuelphy We are using GoreTex membranes in our RuuviTag+ (with all sensors) enclosure to avoid condensation and enable sensors to “sense”. Please note also that our RuuviTag enclosure is IP67 certified. Therefore I am not sure how much more advantage we would get from conformal coating. Maybe a little bit in case that membrane doesn’t filter chemicals on air.

@Eternyt This is interesting news as I have been waiting when they will release Primo Core. Actually I saw one video roughly one year ago where they promised to release in last summer. It seems that they meant summer 2017

Ah, good. I have noticed that it takes several days for the RuuviTag+ to get correct humidity readings if installed in a new environment with a big change in humidity. The GorTex membrane probably slows down the process. If I have the time this weekend I can try and install a sensor without casing to see if the humidity data is adjusted more quickly.