A Ruuvitag switched from RAW to URL mode all by itself

I am monitoring temps in different parts of my country plot (from the city 50 km away) and I just noticed that one of my tags suddenly switched from RAW mode to URL mode. I can see it because the temps are now transmitted with 1 degree precision and some other measurements available only in RAW mode have just disappeared.
The temp when it happened was around -5 Celsius (this very tag has survived -24 a week ago), battery voltage was around 2.881 volts (other tags show less).
I wonder if it ever happened to anyone else? Is it a bug or a feature?

I would guess this is caused by tag resetting itself for some reason.
Upcoming firmware release boots always in RAW mode and further down on roadmap we’ll store the mode to flash.

This has happened to others, mostly in environments with heavy vibration

Thank you otso!
If it becomes regular occurence I guess I will need to upgrade firmware to the new one…
There should be no vibration there at all unless some freak hare decided to play with the tag a little and then put it back where it was

PS I’m so glad Scrin’s RuuviCollector collects data in all formats - even after the tag unexpectedly changed formats, I’m still getting whatever information available logged!

I actually had this happen to my tag located indoors in my Sauna, not moving or vibrating at all. By inspecting the measurements just at the time of the “reset”, it seems that the measured battery voltage was dropping rapidly right before and eventually the tag shut down, until the voltage was restored a bit later.

I believe this was caused by thermal expansion and some dust or so getting rolled between the battery clip and the battery, or some other environmental effect causing a temporary disruption in the voltage supply.

I’ve also noticed that the voltage is much more consistent if I gently wiggle the battery clip along the battery surface “scratching” a few times back and forth after inserting the battery or removing the plastic clip, probably some dust or residue or something is left there otherwise.

When I went to check on my tag that had rebooted itself for no apparent reason, I noticed the gaping hole where the sticker had been. When I opened the case, the sticker was lying on the circuit board and looked intact - no evident mechanical damage like in Eternyt’s case. It even retained some “stickiness” so that I was able to stick it right back to where it had been. I have no idea whether the sticker incident had anything to do with the tag rebooting itself but I presume that any stats might be helpful to the manufacturer. The tag had been sitting outdoors for the last four weeks with temps between -28 and -1 Celsius, sometimes sun shining on it.

If I would need to guess: not perfect sticker assembly (at our factory) + really cold environment + sun shining on the tag heating it quickly. Or a bird with a not so sharp beak

I went to check on the re-applied sticker to only find it undone and lying inside the box again. Took a closer look and decided to take a picture of “no evident mechanical damage” (after I stuck it back into place) 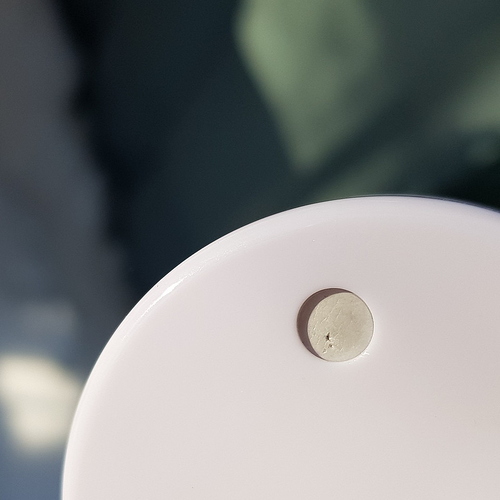 Not a bird expert but I’m pretty sure it’s the hole, looks like it could be a little hole like in trees with possible insects or other “food” inside

Sounds reasonable. Maybe attaching the sticker on the outside of the box will decrease the “bird appeal” as there will be no perceivable hole to probe?

We are putting the finishing touches on the solution we built around use of RuuviTags (manufacturing environment). We have not seen this behavior in the few tags we have been testing with for our pilot, but I can see this being a valuable configuration as we begin to deploy(the fewer plant managers needing to monkey with a tag and press the ‘B’ button, the better!) Any rough idea of when this behavior of defaulting to RAW might be on production units being shipped on new orders?

The current FW is in beta, and can be found at https://github.com/ruuvi/ruuvitag_fw/releases/tag/1.3.3-beta . @lauri can update you on the schedule assuming no bugs are found