Anyone running the
Web Bluetooth Configuration Tool on Chrome on a MacBook?

Whatever I do I end up with a flag saying ‘Beacon not advertising, try switching it off and on’.

Have you pushed the “B” button on the Ruuvi Tag?

Just a nudge reminder: IOS is the iPhone version of Apple’s OS. macOS is the desktop/mac OS.

I received my beacon this weekend and the tool you mention above was the first I tried. It didn’t connect, but my Mac is older - a late 2013 model - so I think my Bluetooth hardware might be too old to work correctly with the WBCT tool.

If you have an iPhone, I suggest trying Google’s “Beacon Tools” app.

Yep I gave up and paid £22.00 for an old android phone and the web tool works fine on it.
The google tool seems too much faffing about with registering et al.
The iPad is fine for checking the tags work so I am getting there…tks for the reminder though.

PS
As a matter of interest Nearby on the Andorid phone appears to show one Ruuvitag running the weather app even if there are three tags in the same area.
Click the link and the three pages are open in different tabs.

Yep I gave up and paid £22.00 for an old android phone and the web tool works fine on it.
It’s not new enough for chrome nearby to work but the phys net app on iPad is fine for checking the tags work so I am getting there…tks for the reminder.

And now as if by magic nearby working too.
All I need now is being able to identify which beacon I am looking at and I’m there,

Now I have set the Eddystone UID Namespace the same on two beacons but the Instance different.

So the UID is still unique but for the last digit and I know which tag is which.

Now all I got to do is get a an app to recognise which data applies to which Instance. 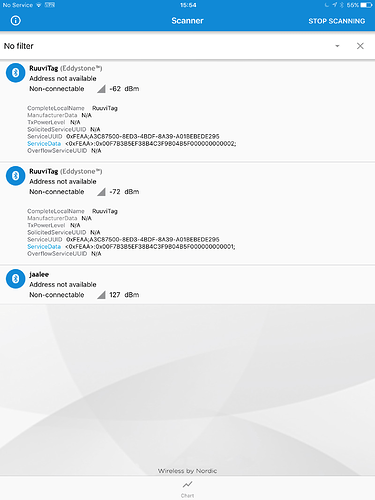 It looks like you’re making a great deal of progress so far - kudos for that!